After messages are fetched from Kafka, Karafka will split incoming messages into separate jobs. Those jobs will then be put on a queue from which a poll of workers can consume. All the ordering warranties will be preserved.

You can control the number of workers you want to start by using the concurrency setting: 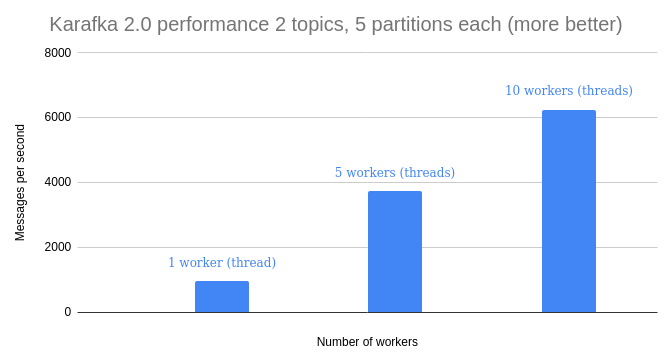 Note: Please keep in mind that if you scale horizontally and end up with one Karafka process being subscribed only to a single topic partition, you can still process data from it in parallel using the Virtual Partitions feature.

Karafka uses a concept called subscription groups to organize topics into groups that can be subscribed to Kafka together. This aims to preserve resources to achieve as few connections to Kafka as possible.

This grouping strategy has certain downsides, as with one connection, in case of a lag, you may get messages from a single topic partition for an extended time. This may prevent you from utilizing multiple threads to achieve better performance.

If you expect scenarios like this to occur, you may want to manually control the number of background connections from Karafka to Kafka. You can define a subscription_group block for several topics, and topics within the same subscription_group will be grouped and will share a separate connection to the cluster. By default, all the topics are grouped within a single subscription group.

Each subscription group connection operates independently in a separate background thread. They do, however, share the workers' poll for processing.

Below you can find an example of how routing translates into subscription groups and Kafka connections: 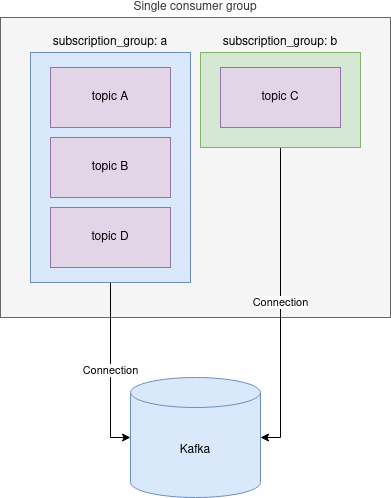 *This example illustrates how Karafka routing translates into subscription groups and their underlying connections to Kafka.

Note: This example is a simplification. Depending on other factors, Karafka may create more subscription groups to manage the resources better. It will, however, never group topics together that are within different subscription groups.

If you are interested in how librdkafka fetches messages, please refer to this documentation.

Karafka allows you to parallelize further processing of data from a single partition of a single topic via a feature called Virtual Partitions.

Virtual Partitions allow you to parallelize the processing of data from a single partition. This can drastically increase throughput when IO operations are involved. 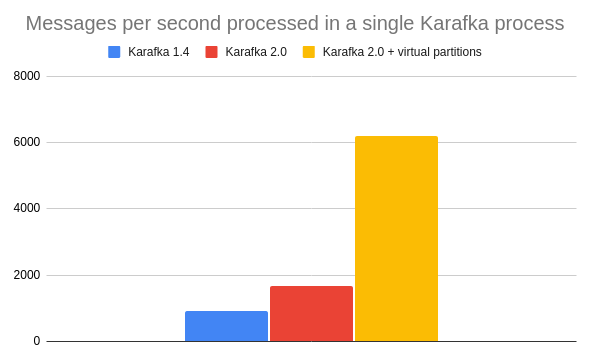 *This example illustrates the throughput difference for IO intense work, where the IO cost of processing a single message is 1ms.

You can read more about this feature here.

Since each consumer group requires a separate connection and a thread, we do this concurrently.

It means that for each consumer group, you will have one additional thread running. For high-load topics, there is always an IO overhead on transferring data from and to Kafka. This approach allows you to consume data concurrently.